What's in a Name?

You might decide to change the name of your rescue cat for a number of reasons.

Perhaps you don't like the name Tinkle or Twinkle or Fido and would prefer something else.

Or maybe you already have or recently had a cat called Smudge (as has happened to me) and wish to choose a completely different name, because life is confusing enough.

Patch came to me in a bad way and she'd got herself in a bad way (most likely) at the hands of the human/s that originally named her. Imagine her in a situation where 'PATCH!' was repeatedly shouted at her in anger. Cats can't speak (thank goodness) but they are intelligent enough to make a connection between events. I knew that if I persisted in calling her Patch (or a name that sounded like Patch) she might - very sensibly - decide to tar me with the same brush as her other humans.

I decided to choose a name that sounded calm. Something with a 'shhh' or 'sss' sound. I'm a keen genealogist, so I looked to my family tree for ideas. Several of my female ancestors were called 'Grace'. This has the 'sss' sound I was looking for, sounds nothing like 'Patch' and is a nice, feminine name for a little cat.

I told David that I'd chosen the name Grace. He didn't like it (which is a bit rich considering he named our other cat 'Derek' and I put my personal feelings aside). I stuck to my guns but with a slight alteration. Cat owners will understand this immediately: I like to sing to my cats. I have no idea whether or not the cats like it (I only know that other humans don't). I find it easier to sing about my cats when their names have two syllables. So I added a second syllable to Grace and arrived at Gracie.

This wasn't to be the most difficult part of Gracie's journey but it remains one of the most important decisions we made for her.

The lady in this picture is my Gt Gt Gt Aunt Grace Pottinger. Gracie is named after her. This picture was taken in Shetland on 30 April 1899. Aren't the hats wonderful? 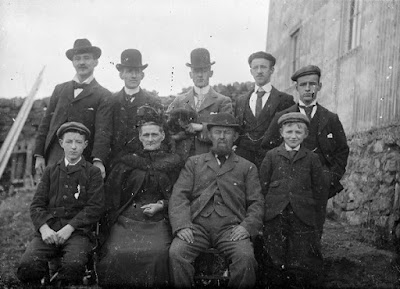 Please support Wood Green, The Animals Charity by sponsoring my Fire Walk (16th April 2016). Even if you can only spare £1. Wood Green will make your money go a long way towards helping the unwanted animals in their care.
Posted by Councillor Julie Howell at 09:32